The invitation said that tiaras were optional.  There was no question about the wine though.  We knew there would be lots.  On arrival an Overberg bubbly.  Genevieve, was opened and the dry, sparkling juice poured from the stylish black bottle.  Our usual group of gals were joined by 2 English gentlemen for this month’s meeting.

The Genevieve MCC was followed by Klein Constantia Sauvignon Blanc.  I don’t remember much about this wine except for the fact that I enjoyed it and will have it again.  Then  a line-up of 3 wines for blind tasting:  La Vierge Nymphomane 2014, Pella 2015 – a Cinsaut – and Thunderchild 2015.

Nymphomane and Thunderchild are both Bordeaux blends but from different parts of our South African winelands.  Nymphomane comes from the cool climate Hemel-en-Aarde whereas Thunderchild is a product of the warmer Robertson. Thunderchild is made by Abrie Bruwer of Springfield and sold for charity as the proceeds go to the children of Die Herberg orphanage.

We ended the evening with Quoin Rock’s Sauvignon Blanc straw wine and I had to wonder what has happened to this property that had a farm on the Cape South Coast and in the Boland.  The name traces its origins to Agulhas, where Quoin Point is the second most southerly point, after Cape Agulhas itself. 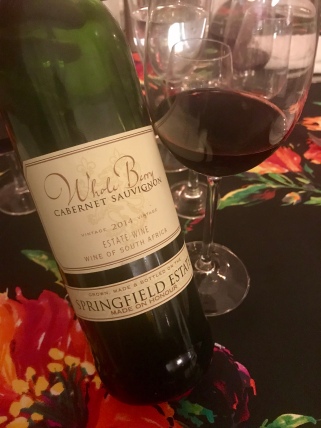